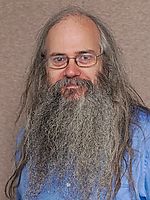 LTI Professor Alan Black was referenced in two recent articles about the future of artificial intelligence.

In the Forbes article "Meet the AI Team Powering Facebook's Language Tech Efforts," Black comments on Facebook's two-year effort to challenge companies like Google and Microsoft, who have been working on language understanding and translation tools for much longer.

"Facebook's a bit behind because they've only recently started,” Black told Forbes. "But they can catch up."

Black was also mentioned in a Consumers Digest article, "New-Age Apps," that discusses the roadblocks to designing intelligent agents that are truly humanlike. "Alan Black, who is a speech-technology expert at Carnegie Mellon University, says the work ahead must account for the overlaps, interruptions and hesitations that are common to human speech," the article noted.

Read more in the Forbes and Consumers Digest articles.