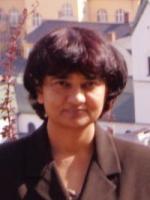 FactCheck.org reached out to LTI Senior Systems Scientist Rita Singh, and asked her to analyze "John Miller's" voice on a tape and to compare it to an interview Trump did with Connie Chung in 1990. Her conclusion: "John Miller" is Trump

Enter FactCheck.org, a nonpartisan, nonprofit consumer advocate for voters that aims to reduce the level of deception and confusion in U.S. politics. The organization reached out to Language Technologies Institute Senior Systems Scientist Rita Singh, and asked her to analyze "Miller's" voice on a tape and to compare it to an interview Trump did with Connie Chung in 1990. Her conclusion: "John Miller" is Trump.

"Same person," Singh told FactCheck.org. "Several micro-sections of his voice in the John Miller tape match the corresponding micro-sections in his Connie Chung interview from 1990."

The article goes on to note that Carnegie Mellon researchers, including LTI Research Professor Ed Hovy, fragment speech into tiny sections — fractions of a second. From these sections, they measure different micro-scale properties of sounds and the transitions between them. "Singh likened these micro-properties to bar codes. 'And if those bar codes match,' she said, 'there is a very high probability that it’s the same person," the article noted.

"No matter how much you try to change or disguise your voice, many things about your voice are out of your voluntary control, you cannot change them,” Singh told FactCheck.org. "Matching these helps us determine if someone is impersonating a speaker or not."

Comparing the micro-level speech of "John Miller" to that of Trump in the Connie Chung interview showed four matching micro properties — enough to convince Singh it was Trump in both interviews.

Read the full article with all the details on FactCheck.org.